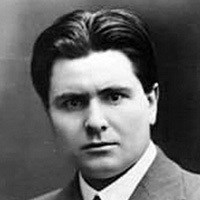 Carlo Galeffi was born in 1882 and would make his professional operatic debut in 1903. Galeffi was a favorite of Toscanini and a stalwart of La Scala in Milan, singing there regularly from 1912 through 1938.  Throughout his career he excelled in the works of Giuseppe Verdi and also was very capable in the Verismo repertoire. Most biographical reference books refer to him as a student of the Roman singing master, Antonio Cotogni, whereas the singer himself always insisted on being a complete autodidact. Galeffi made his debut in 1907 in Fermo in Donizetti`s “La favorita”. In the same year he appeared at the Teatro Adriano in Rome as Amonasro. Within a short period of time he gained great fame in Italy, especially as an interpreter of Verdi`s music. Only three years after his stage debut Galeffi appeared for the first time at the Metropolitan Opera of New York. Especially his Germont in “La traviata” (with Nellie Melba as Violetta) was highly praised. In the year of his MET debut the singer gave his first performance at the Scala of Milan which was to remain his artistic home for three entire decades. Among Galeffi`s most glorious impersonations on the stage of the Scala surely was the title role in Verdi`s “Nabucco”. Galeffi`s name is also closely associated with the world premiere of Boito`s posthumous work “Nerone” (1924) where he interpreted the role of Fanuel. The baritone had the fortune to be one of Toscanini`s favourite singers and took part in nearly every world premiere or first Italian performance represented at the Scala during the era of Toscanini.

Galeffi has a voice of moderate power but it was the outstanding balance of his voice which enabled him to sing this demanding repertoire with such ease. The great harmonic balance, chiaro-scuro, that Galeffi was able to maintain throughout his entire range gives his voice a tremendous evenness of tone and ring, which is truly suited to the high tessitura Verdi baritone roles, and his flexibility of voice at faster tempi was no doubt a reason Toscanini favored him, as he remained exciting and in control in the difficult moving Verdi passages.

Galeffi is often forgotten alongside the more luminous baritones of his era, but this is a voice much like Apollo Granforte which deserves study by any aspiring baritone for its technical excellence. Although Rigoletto is considered Galeffi’s standout role, we present below a lesser known gem from Mascagni’s Guglielmo Ratcliff, recorded in 1928, which truly shows the impressive agility and power of Galeffi.