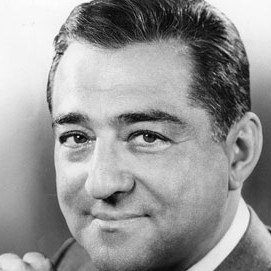 Robert Merrill was born Moishe Miller on June 4th 1917 in Brooklyn/New York. Like many artists of the „Italian department“ at the MET in these days, Merrill´s family, too, had their roots in Eastern Europe: his parents had emigrated from Poland some years before he was born. Although young Merrill longed to become a baseball star, his mother, Lillian, was determined to turn her son into a famous opera singer. He began vocal studies with Samuel Margolis and after hearing Richard Bonelli in a performance of „Il Trovatore“, which, on his own account, deeply impressed him, he decided to seriously pursue a career in opera. Before becoming famous as an opera singer he already had his own radio program and regularly appeared at Radio City Music Hall. In 1944 he made his first attempt at the Metropolitan Opera Auditions of the Air, where he failed with an „exaggerated Ruffo-imitation“ of „Largo al factotum“. The months until the next MET audition were filled with some operatic appearances in „Aida“ and „Carmen“ with the likes of Martinelli, Swarthout and Tokatyan. Iago´s „Credo“ from „Otello“, „this time in the version of Robert Merrill“, secured him the first prize in his second try at the MET-auditions in 1945 whereupon he was offered a contract by Edward Johnson. After repeatedly having refused to make his debut in a minor role, Johnson gave him the opportunity to appear on short notice as the youngest father Germont in MET-history on December 15th 1945: his partners on this occasion were Licia Albanese and Richard Tucker, who sang his first Alfredo replacing his brother-in-law, Jan Peerce – an „all Brooklyn cast“, as New York newspapers proudly remarked. Merrill had begun his career „on the top“ and continued the tradition of American baritones of his predecessors, Lawrence Tibbett and Leonard Warren, who was only some years Merrill´s senior, but died as early as 1960. Still in 1945 Merrill sang at the funeral service for President Roosevelt. One year later Toscanini chose him for his „Traviata“-recording (with Albanese and Peerce) and later in 1954 for „Un Ballo in Maschera“ (with Nelli and Peerce). (Like others, Toscanini, too, repeatedly complimented Merrill on his exemplary Italian pronunciation, although off stage, the singer could not speak a word of Italian.) Merrill sang Posa in Rudolf Bing´s opening season as General Manager of the MET in 1950/51 in a production of „Don Carlo“ (with Björling, Rigal, Barbieri and Siepi). In the course of this season Bing fired Merrill for breach of contract because the singer had accepted an offer to make a film in Hollywood „to contribute to the national culture”, as Bing cynically commented on it, instead of joining the MET on its spring-tour. The fact that the movie, „Aaron Slick from Pumkin Crick“ became a giant-flop at that time (which fell together with his short-lived marriage to Roberta Peters) bothered Merrill less than the prospect of never again being able to appear at the MET. This „escapade“ also cost him the role of Guglielmo in the premiere of „Così fan tutte“, for which he was scheduled in this season.

Merrill´s book „Once more from the beginning“ (1965) contains a vivid and highly entertaining description of how he spent entire months showing up wherever Bing went and remorsefully begging for his return. After a public letter of apology and the promise „to be a good boy from now on“ Bing was finally pacified. On March 11th 1952 Merrill celebrated his return to the MET in a performance of „Il Trovatore“. Among his close to 800 performances until 1974/75 (and an additional 200 on tour) in 85 roles which included Escamillo, Rigoletto, Ford, Scarpia, Valentin, Amonasro, Figaro („Barbiere“), Conte di Luna, Silvio, Posa and Enrico („Lucia“), the MET owed to him some of its finest performances. In 1971 Merrill once more sang Posa on the opening night of Bing´s last season at the MET. Although he did make guest appearances in South America and Europe (Covent Garden-debut: 1967 as Germont), mainly in Italy, the essential part of his career was devoted to the Metropolitan Opera. Merrill’s versatility as an artist became evident in his shows with Louis Armstrong or Joan Rivers in Las Vegas and Atlantic City or his friendships with Danny Kaye and Frank Sinatra, with whom he frequently appeared on TV. Between 1970 and 1974 he Merrill gave more than 500 performances on New York Broadway as Tevje in „The Fiddler on the Roof“ and also went on tour. Together with Richard Tucker he gave a series of highly acclaimed „joint recitals“ all over the United States from 1972 on, which were tragically put to an end in 1975 by Tuckers death (caused by a heart attack) some hours before a concert in the State of Michigan. In 1983 Merrill still took part in the MET´s Centennial-Gala-Performance and today lives near New York. The fact that Robert Merrill generally is remembered more for his singing than for his interpretations does in no way reduce his artistic merits. His voice was well focussed, it had a wonderfully rich resonance and a remarkable ring; until the end of his career he maintained complete control over it.

Neither his top nor the low notes showed particular weak points and many of his colleagues confirmed, how exemplary he could be as an ensemble-singer. All his recordings give evidence of how much he enjoyed singing. – But then, he also enjoyed a good life: he was not exactly somebody who spent every free minute burying his head in a new score or adding new touches to a well-established role. „His Scarpia sounds like his Germont and is just as sympathetic as his Rodrigo. [. . .] Merrill spent most of „Vissi d´arte“ staring compassionately at his Tosca and no one would have been surprised had he led the applause afterwards.“, an American critic wrote after a performance of „Tosca“ in 1965. „He did not lend his roles their features, but his.“, as Jürgen Kesting put it. Merrill´s singing was „pure voice“. In this respect, Jussi Björling, who sincerely admired him (they were close friends, too) was an ideal tenor-partner. Their recordings of duets from „Don Carlo“, „I Pescatori di Perle“ and „Otello“, among others, (Merrill remembered how he and an apparently nervous Björling walked and walked around the block before entering the recording studio: „Bob – Caruso and Ruffo, that´s what I want it to sound like!“, he implored me. „We´ll try“, I replied, „but it´ll still be Jussi Björling and Robert Merrill.“) are rightly considered some of the finest duet-singing in recording history.