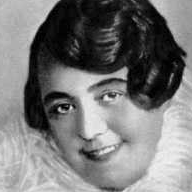 Emmy Bettendorf, born on July 16th 1895 in Frankfurt am Main, already started to sing at a very tender age. The girl was not even 15 years old when she auditioned for the Opera House of Frankfurt where she accepted a two-year-contract in 1914 making her debut as Gabriele in Kreutzer`s “Nachtlager von Granada”. After a guest performance as Agathe at Vienna`s Court Opera in 1916 the artist was engaged in Schwerin for the next four years. Here, Bettendorf took the opportunity to extend her repertory into all directions and interpreted roles from the lyric as well as from the youthful-dramatic repertoire with increasing success.

A certain number of guest performances at Berlin`s State Opera in 1920 finally led to a permanent engagement. In 1924, however, the soprano moved on to the Städtische Oper of Berlin where she was to be heard in numerous opera and operetta productions during the following five years.

Guest appearances in the Netherlands together with the Opera Society managed by the singer, Cornelis Bronsgeest, enabled Bettendorf to present herself as a Mozart singer. She performed at Zoppot`s Waldoper and was heard in opera and concert in almost all major German cities. In consequence of an illness the singer bade farewell to the stage but kept in touch with the public by concentrating on her work in the recording studio until about 1936. From then on, she occasionally still sang in concerts.