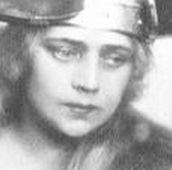 Gertrude Kappel was born on September 1st 1884 in Halle an der Saale, Germany. started to study singing at the Leipzig Conservatory as a pupil of Arthur Nikisch. Already on the occasion of her debut at the Opera House of Hanover in Beethoven´s “Fidelio“ in 1904 her voice caused quite a stir. She was offered a permanent engagement and soon sang her first big role, Salome. Although she was generally considered to be a mezzo soprano, Kappel was repeatedly cast in soprano roles. In 1912 she made her debut at the Covent Garden Opera in London as Brünnhilde in “Die Walküre“ and “Götterdämmerung“. One year later, she repeated these two roles and added Venus and Elisabeth in “Tannhäuser“ under the direction of Arthur Nikisch and, again, returned to London in 1914 to sing the three “Ring“-Brünnhilden. At the Opera House of Hanover she was heard as Donna Anna, Pamina, Aida, Santuzza, Elektra and Octavian, but also in operetta-roles, such as Saffi in “Der Zigeunerbaron“ or Rosalinde in “Die Fledermaus“. Richard Strauss, who had followed her career with great interest, recommended her to the Vienna State Opera, where Kappel made her first appearance in 1921. Under Strauss´ direction she sang Donna Anna at the Salzburg Festival in 1922.

Bruno Walter brought her back to London for his production of the “Ring“, where her partners were Lotte Lehmann, Maria Olszewska and Jacques Urlus. In 1925 she was, again, acclaimed by the London public under Bruno Walter as Elektra and Senta. In the years 1925 and 1926 the singer appeared in Vienna as Färberin in “Die Frau ohne Schatten“, “Walküre“-Brünnhilde, Ortrud, in “Violanta“ by Erich Korngold and in “Die Königin von Saba“. At the New York Metropolitan Opera Gertrude Kappel made her debut in 1928 as Isolde (with Rudolf Laubenthal, Karin Branzell and Michael Bohnen), which became one of her greatest personal triumphs. In New York she was heard as Brünnhilde, Kundry, Fricka in “Rheingold“, Leonore in „Fidelio“, Elektra and in a series of performances of “La Juive“ with Giovanni Martinelli. Her farewell performance at the MET took place in 1935 as “Walküre“-Brünnhilde with Flagstad and Melchior as her partners.

Although Kappel´s name will remain principally linked to the works of Richard Wagner, her repertory in both the French and Italian fach was impressive, too. Apart from her outstanding vocal merits, critics praised her ability to shape and „sense“ the characters of the roles she impersonated on stage. Astonishingly, this excellent singer, who has enjoyed a great international career, has left all too few recordings: in 1911 “Favorite“ produced 16 titles and only in 1924 she recorded 6 titles for “Grammophon“, three further recordings remained unpublished. Gertrude Kappel died near Munich in Bavaria on April 3rd 1971.