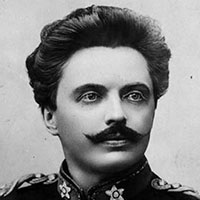 Born on 26 July 1871 in Kharkiv, Ukraine, Russian tenor Andrei Labinsky studied singing at the Petersburg Conservatoire (1895-1899) with Stanislaus Gabel and Victor Samus. He debuted in 1899 at the Maryinsky as Berendei, singing there until 1912 and returning for the seasons of 1919-1924. He went to the Bolshoi for the periods 1912-1919 and 1924-1926. He toured frequently throughout USSR and was invited to sing in Japan.

The voice was a brilliant open sound supposedly up to high ‘F’. He ‘created’ the roles of Vsevolod (Invisible City of Kitesh) andAfer (Servilia). Among his best lyrical roles were Alfredo, Almaviva,Dubrovski, Duke of Mantua, The Indian Guest, Lenski and Vladimir(Prince Igor); also tackling bigger roles such Raoul and Samson. He made c300 records.