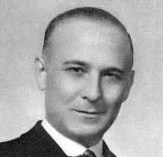 Cristy Solari was born in Smyrna of Italian parents and studied singing in Milan. It is not clear when he made his debut, but he certainly sang ‘Rigoletto’ at La Scala in 1915. His career took him to the important theatres in Italy and while he visited South America in 1929, and also sang in Austria, his career was in the main in Italy successfully holding his own with singers such as Luigi Fort, Tito Schipa, Nino Ederle, Giovanni Malipiero. Interestingly,he led a double life, because as ‘Franco Lary’ he was also a singer of popular songs with more than fifty recordings of such for Columbia.