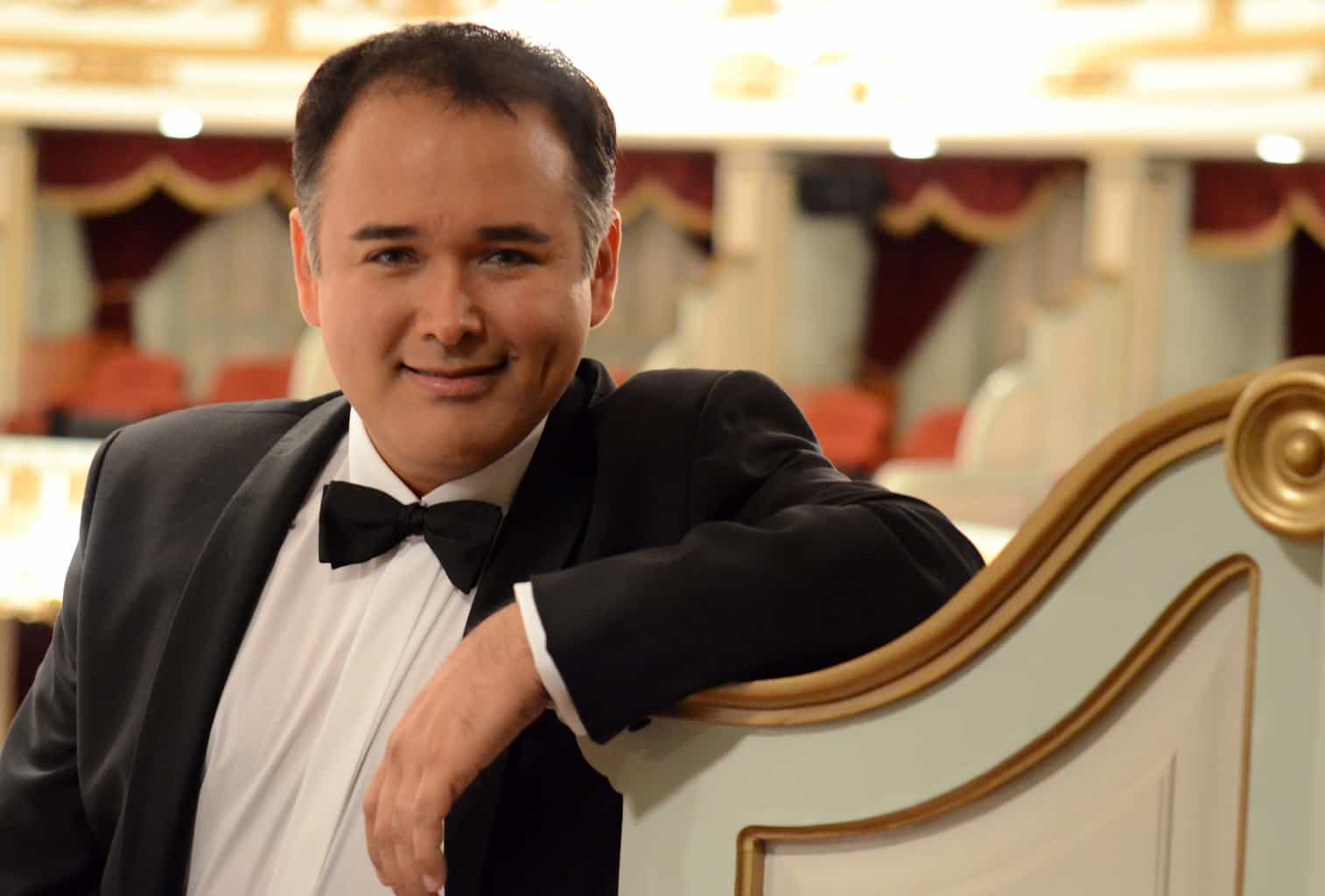 Sitting Down with tenor Javier Camarena Tenor Javier Camarena is appearing in Georges Bizet’s The Pearl Fishers at the Los Angeles Opera from October 7 to October 28. Camarena sings the tenor role of Nadir, Nino Machaidze sings Leila, Alfredo Daza is Zurga, and Nicholas Brownlee is Nourabad. Plácido Domingo and Grant Gershon share conducting duties. Penny Woolcok is the director. I sat down with Javier to discuss this production and life as an opera singer.

Eva: When I saw you were cast in Georges Bizet’s Les Pêcheurs de Perles, I immediately went out and got tickets. I could hardly wait. Isn’t Nadir a departure from your usual bel canto roles and your Rossini and Donizetti repertoire?

J. Camarena: Nadir is a role that I sang seven years ago already [in Zurich]. Singing this role again in L.A. is an opportunity to see how my voice has developed, and also to see how the more lyrical parts of this opera have now, in a certain way, become more comfortable for me. It’s an early work of Bizet’s and there is actually a lot of bel canto in it. When you listen to the arias, not only “Je Crois Entendre Encore”, but also Leila’s aria, and Zurga’s aria, these are all very much bel canto arias. I try to conceive this role and sing it from a very bel canto point of view.

Eva: What is it like to work with Maestro Plácido Domingo in this production as the conductor? He’s such a legend!

J. Camarena; It’s a great experience and an amazing chance to collaborate with one of the most fascinating singers and musicians of this era. He’s also a great musician. It’s such a pleasure. I hope also someday I will be able to sing something with him.

Eva: Do you learn from him as you’re doing this production or is it more direction that he gives you?

J. Camarena: There’s a lot of direction in the way to conceive intentions and there is also the interpretation of certain parts. He’s a person you can learn from, always.

Eva: It’s such a beautiful and colorful production. I understand that Penny Woolcock is better known as a film maker. What does she bring to this production that is different and unexpected for you?

J. Camarena: Because she’s used to showing things to a camera, she pays a lot of attention to details when she’s directing. It’s her way of seeing. I think the whole production is visually very attractive. The lighting has been done in a particularly nice way and the design of the costumes turns it into a work, an idea, that’s very complete. Right at the start, when the overture begins, the first thing you see is a beautiful scene of the divers searching for pearls. It’s beautiful to watch. This movement is part of the details that make it a very interesting and complete work. Penny is also respectful of the needs and the ideas of the singers. It’s a great production full of collaboration. Eva: What are two or three of the favorite roles you’ve sung over the years?

J. Camarena: That is a hard question. I enjoy singing Arturo from I Puritani very much. I Puritani is Bellini’s last work and it’s the Everest of the bel canto repertoire. It’s one of the most beautiful works, not only for the tenor, but for every single role. It has such beautiful and moving music. It’s full of beautiful melodies.

The other role I enjoy is Ramiro from La Cenerentola. I find it really funny. I like it that in the Rossini repertoire buffo roles, which are normally very light and very high tessitura for the tenor, like in L’Italiana in Algeri and even in Il Barbiere di Siviglia, Ramiro is different, in the way that Rossini wrote it, and allows for the possibility to sing it with a little more authority. It gives the tenor the possibility to use more voice. I don’t always have to take care to be in the high register. I can explore the voice and do more in terms of expression because Ramiro can be very temperamental sometimes.

J. Camarena: Yes, for me it means more vocal freedom.

Another role is where I haven’t made my debut yet but it will happen right after The Pearl Fishers in Los Angeles. I will go to Madrid and make my debut in La Favorite by Donizetti. I find this role very interesting. There are so many different moments of emotion and also a lot of beautiful melodies, like the arias that I sing. The duet with Leonora is also wonderful. The whole last act is beautiful dramatically. I haven’t sung it yet but I already know that I will really enjoy it.

Eva: Do you have any roles you dream about doing that you have not yet performed?

J. Camarena: There are a lot of those. I dream about learning a lot of the repertoire. Of course, I’m still based more in bel canto now, and La Favorite in that repertoire is imminent. I will be singing Edgardo from Lucia di Lammermoor also in Madrid at the end of the season.

I would love to do Anna Bolena. The tenor is maybe not one of the main roles but it’s part of my intention to grow in the lyric bel canto repertoire for the tenor.

My dream role, and maybe I’ll never do it, would be Cavaradossi [from Puccini’s Tosca]. Of the Puccini roles, I see as more real and possible the role of Rodolfo [from La Bohème], but that will also take some time. I’m not eager to rush that part. I still need to learn more and to grow. I want to be very certain that when I arrive at that dramatic part, I will be older so that I give it the best possibility of doing good work there.

Eva: Are there any great opera singers you would have liked to meet and perform with, from the past, or the present?

I would have also loved to listen to Fritz Wunderlich live or maybe sing a duet of a Neapolitan or Austrian song with him.

It would be great to perform or sing something with Anna Netrebko. She’s one of my favorite singers nowadays. Her energy on stage is contagious and I would like to be part of that.

Eva: I went to see you in Les Pêcheurs de Perles two weeks ago on opening night and I was moved to tears by the beauty of your singing during “Je Crois Entendre Encore”. It was a very emotional moment for me. Looking back at your career, are there any special moments that stand out for you because of their strong emotions, because you were so moved, whatever the emotion?

J. Camarena: The repertoire I’m doing now is, most of the time, comedy or buffo operas. One of the most emotional roles I had was in a Japanese opera, Yūzuru [by Ikuma Dan]. I was singing the main role, the husband. It’s a very touching opera with a strong lesson at the end. Also an emotional moment is the duet between Nadir and Zurga from The Pearl Fishers. It’s very touching and moving and emotionally strong. It’s about friendship and it’s a very beautiful moment in the opera. Eva: Do you become emotional when you sing it?

J. Camarena: I practice that. I let myself be emotional when I’m learning, studying, practicing, and imagining what I would like to express on stage. When I’m on stage, it’s already more settled in my heart and my body. Of course, I feel it, and it’s exciting, but it no longer moves me to tears.

Eva: So you absorb the role and the emotions but you retain control?

Eva: You are one of the rare opera singers who has been called back for encores during operas at the Metropolitan Opera. What does that feel like? It’s such a rarity. How did you feel?

J. Camarena: That particular moment at the Met is one of the most exciting, emotional, and moving moments in my whole career. As a singer, you can feel the applause of the public. You can really feel it when it’s an applause of recognition, that you’re a great singer, it’s amazing, surprising, and enjoyable. But there’s another different kind of applause, that’s warmer, more profound. It’s full of gratefulness, and that’s actually what I felt in that moment.

It felt like there was mutual feedback or communication. What I wanted to express with my aria and through my singing and for the public to receive all that emotion, the public was thankful for that and I was even more thankful for receiving that kind of applause, that kind of recognition. It was so beautiful. It was one of the first huge ovations I had in my career. It was really a very magical and beautiful moment.

Eva: And it happened twice?

J. Camarena: It happened for La Cenerentola and my next performance at the Met was in Don Pasquale and it also happened then. It was very nice.

Eva: I would like to ask you about how you keep the balance between family and professional life. Do you have any rules that you live by?

J. Camarena: My family and I live in Switzerland. That’s a great advantage because it’s in the center of Europe and it’s easy to travel everywhere in Europe. There are even direct flights to LA. It’s connected to every part of the world. This is also such a great time with technology because we can be just one click away from actually seeing the people we’re talking to. In a certain way, it takes you a little bit closer to your family.

My daughter is 13 and my son is 7 years old. I like to be in touch as much as possible. We try to talk every single day. It’s also important for me to be present for my kids. Also, their schools have a very good system. They have two weeks of vacation about every three months. Every time they have the opportunity, they come to wherever I am. And if I have a small break between performances, I always go home. It’s not easy to keep up with this rhythm. It’s a different model of the traditional family but we learn to adapt to these conditions.

Eva: Thank you so very much for the time you took to answer my questions and share your thoughts. I’m a very big admirer and it was really a pleasure for me to talk to you.

J. Camarena: Thank you very much.