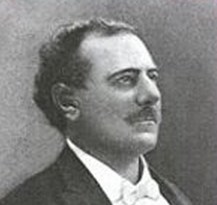 A singer, who belonged to last century´s “titans“ – a representative of an era, when much more importance was attached to the art of vocal technique than today. Antonio Magini-Coletti´s baritone voice ranks among the most magnificent vocal instruments of our knowledge. Apart from the voice´s extraordinary colorfulness and the rich sonority, Magini-Coletti is admired for his phenomenal breath control and his exemplary voice projection and diction. It might take today´s listener some time to get used to his interpretation and vocal expression: a somehow exaggerated pathos, the pronounced vibrato when reaching a dramatic climax and a sentimental touch might well seem old-fashioned. Keeping in mind that this was an artist, whose best years as a singer fell well into the nineteenth century, one has to recall that vocal manners of this kind then were customary. Antonio Magini-Coletti was born in the town of Iesi near Ancona in 1855 and studied with the famous singing teacher, Venceslao Persichini. In 1880 he made his stage debut at the Teatro Costanzi in Rome as Count Luna in “Il Trovatore” and spent the following years singing in Spain and South-America.

In 1887 he was invited to make his debut at the Scala of Milan, where he replaced Victor Maurel as Amonasro in “Aida”. Magini-Coletti remained at the Scala in the years from 1887 to 1889 and from 1900 to 1903. At the Scala he also took part in several world premieres: 1887 in Samaras “Flor Mirabilis” (this premiere was also the occasion of Emma Calvé´s disastrous Scala-debut), on April 21st 1889  in Puccini´s “Edgar” and on January 17th 1901 in Mascagni´s “Le Maschere”. In 1902 he sang in the Italian premiere of Weber´s “Euryanthe”. When Arturo Toscanini started to introduce the operas of Richard Wagner to the Scala around this time, Magini-Coletti was his Kurwenal in “Tristan und Isolde” (1900/01) and Wotan in “Die Walküre” (1902). Other works he was cast in during his years at the Scala were: “L´Elisir d´Amore” (with Caruso), “La Reine de Saba”, “Luisa Miller”, “Un Ballo in Maschera” and “La Damnation de Faust”. The season of 1891/92 saw his debut at the Metropolitan Opera in New York as Capulet in Gounod´s “Roméo et Juliette”. During his only season at the MET he was also heard as Nevers in “Les Huguénots”, as Don Fernando in “Fidelio”, Rossini´s Figaro, Amonasro in “Aida” (with Lilli Lehmann and Jean de Reszke) and Count Luna in “Il Trovatore”.

In London, Moscow, St. Petersburg, Monte Carlo and in many American cities, too, his singing was greatly acclaimed. In 1893 he was engaged at the Teatro San Carlo in Naples for performances with Fernando De Lucia in “Lohengrin” and “Carmen” and in the world premiere of Daniele Napoletano´s “Il Profeta velato”, which was a terrible failure. One of Magini-Coletti´s outstanding artistic characteristics was his versatility: he could form and mold his voice according to the requirements of the most varying baritone roles: his repertory stretched from early bel canto operas by Rossini and Donizetti (as Belcore and Figaro he was an excellent buffo and his coloratura singing was remarkable) and French Opera (Meyerbeer) to Beethoven´s “Fidelio” and the great Verdi roles, Count Luna and Amonasro, and also included Wagner operas (“Lohengrin”, “Tristan und Isolde” and “Die Walküre”) and verismo operas of the “nuova scuola”. Antonio Magini-Coletti died on July 21st 1912 in Rome.