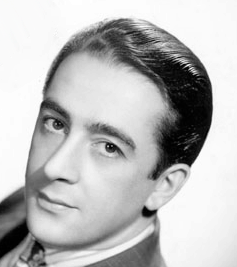 Giuseppe Valdengo was born on May 24th 1914 in Turin in Piemont. At the Conservatory of Turin he completed his oboe studies and also studied the piano, violin and cor anglais. It was the composer, Franco Alfano, then director of the Conservatory, who encouraged him to have his voice professionally trained. After vocal studies under Michele Accorinti in Turin, Valdengo made his operatic debut in 1937 as Sharpless in “Madama Butterfly” at the Teatro Sperimentale in Alessandria. A little later he appeared in Bologna as Marcello in “La Bohème” and in Parma – not yet at the Teatro Regio but at a minor stage – as Figaro in “Il Barbiere di Siviglia”. At the Teatro Regio he enjoyed great success as the “other” Figaro by Mozart. His debut at Milan´s Teatro alla Scala, scheduled for 1939, was prevented by the outbreak of War. Valdengo was called up into the army and played the oboe in a military band. There are various dates given for his actual debut at the Scala: the annals of the Scala list his name for the first time in 1941 in the role of Baron Douphol in “La Traviata” (with Mafalda Favero in the title role and Giovanni Malipiero as Alfredo).

In the following season he was heard in the small roles of the Mandarin in “Turandot”, Franz in “Lodoletta”, the Father in “Hänsel und Gretel” and Sharpless in “Madama Butterfly” and in 1943, again as Baron  Douphol. Only in 1953 did he return to the Scala, as Manfredo in “L´Amore dei tre Re”, and in 1955 he sang Marcello there in “La Bohème”.During a tour of North America he appeared at the New York City Center Opera as Sharpless. His debut at the Metropolitan Opera followed in 1947 as Tonio in “I Pagliacci”. For the following seven seasons he remained in the ensemble of the Met where he sang a total of almost ninety performances in the roles of Marcello in “La Bohème”, Germont père in “La Traviata”, Ford in “Falstaff”, Amonasro in “Aida”, the Count in “Le Nozze di Figaro”, Enrico in “Lucia di Lammermoor”, Lescaut in “Manon Lescaut” and Belcore in “L´Elisir d´Amore”, among others.In 1947 Arturo Toscanini was looking for a suitable singer for the role of Iago in his “Otello” recording for NBC. After a series of unsatisfying auditions he let Valdengo know that he wished to hear him sing: “Un bel colore di voce all´antica.” (“A beautiful ´old fashioned´ voice color.”) was the Maestro´s verdict and he agreed to coach Valdengo in the part personally. “Aida” followed in 1949 and one year later the legendary “Falstaff” production was recorded, which has remained a reference recording to this day. The artistic co-operation between Toscanini and Valdengo resulted in a deep friendship which lasted until the conductor´s death.

Valdengo recalls many entertaining and at the same time profound anecdotes about and conversations with Toscanini in his two books: “Ho cantato con Toscanini” and “Scusi, conosce Toscanini?”.In 1954 he left the Metropolitan Opera. One reason was that with singers such as Leonard Warren, Robert Merrill, John Brownlee, Frank Guarrera and Frank Valentino, the Met was well equipped with first-rate baritones. Another reason was a certain jealousy on the part of Leonard Warren, who never completely got over the fact that Toscanini had chosen Valdengo and not himself for the role of Falstaff. Valdengo recalls that an amused Toscanini told him that Warren had virtually imposed on him his auditioning for the “Falstaff” production, which the conductor was unable to refuse. What Toscanini reportedly missed in Warren´s Falstaff was the sparkling vocalism, musical flexibility and a crisp and biting (mordente as Italians say) diction. Warren, however, saw to it that Valdengo did not feel too comfortable at the Met.Valdengo also recalls that the privilege of being a favorite of Toscanini almost became some kind of stigma for him. eat conductors (he especially mentions Victor De Sabata) actually reproached him for his good relationship with Toscanini and harshly criticised the veteran conductor, whom Valdengo defended resolutely, thus creating many an enemy. In one of his books Valdengo also cites the conductor, Fritz Busch, who once said: “Dear Valdengo, every time you sing one feels the claws of Toscanini.” Valdengo´s career was concentrated in Italy. At the Teatro Regio in Parma he was heard in 1956 in the title role of Borodin´s “Prince Igor” and at the Teatro Regio of Turin he sang Michonnet in “Adriana Lecouvreur”. In 1961 he took part in the world premiere of Renzo Rosselini´s opera “Lo Sguardo dal Ponte” at the Rome Opera House. At the Glyndebourne Festival of 1955 he appeared in “Don Giovanni” and his numerous guest performances brought him to London, Paris, Vienna, Buenos Aires, Rio de Janeiro, San Francisco, Cincinnati, Philadelphia and elsewhere. In later years, his repertoire also included buffo roles such as Dulcamara in “L´Elisir d´Amore” or Giacomo in “Fra Diavolo”. Towards the end of the Sixties his career slowly came to an end and he took to teaching.Valdengo´s recordings (both live and in the studio) and the reviews of his operatic performances reveal considerable unevenness as far as his qualities as an interpreter and as a vocalist are concerned: the claim that Valdengo was in his artistic prime during the time of his co-operation with Toscanini is hard to dismiss.

In the three complete recordings under Toscanini, Valdengo´s portraits of Iago, Amonasro and Falstaff reveal a great range of nuances, colours and delicate shadings. This care for detail gets lost to a large degree in his later recordings to a tendency towards excessive forte singing. Valdengo is an excellent example for demonstrating how important it is for singers to have a conductor who can both inspire and take them in hand.