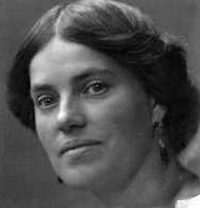 „What I saw was not just any Carmen but  the  Carmen. Every operatic pose retreated into the background and revealed the essence of a woman half demon half driven by physical desires whose blazing intensity reached even the remotest seat in the audience. One had the feeling that an artist of extraordinary intelligence had put together with a secure grip individual elements of Carmen’s character and that an ardent feeling had fused these single elements into an exciting and well rounded portrayal. All this was dominated by intelligence, sheer joy and an impeccable artistic feeling.” Aline Sanden was the singer´s name who was thus revered in the magazine „Das Theater“ in 1914. When Erich Köhrer, writer of this article, heard her as Carmen in Braunschweig in 1906 the singer had just celebrated her 30th birthday. By then she already had ten years of stage experience behind her, a career which had started in Berlin.

Under her real name, Aline Kelch, she appeared at operetta stages and cabaret theatres in Berlin before taking singing lessons with Valeska von Facius. As a coloratura soprano she made her official operatic debut, already under the name, Aline Sanden, in Berlin in 1899. Engagements at the opera houses of Plauen, Braunschweig and Cologne followed her debut before she arrived at Vienna´s Volksoper in 1908. One year later she became the dramatic soprano of the Opera House in Leipzig where she remained until 1921. Her engagement in Leipzig coincided with her first international successes. Her biggest triumphs outside of Germany were in operas of Richard Strauss. She appeared as Salome in Copenhagen and gave her first performance as Octavian in 1913. In this role she outshone not only the Octavian of the world premiere, Eva van der Osten, with whom she alternated her performances, but also two other renowned Octavians, Hermine Bosetti and Sophie Wolff. Sanden´s repertory was quite impressive. It contained Santuzza and Manon, Violetta, Aida and Maliella in “I Gioielli della Madonna”, the Wagner-heroines Eva, Elsa and Elisabeth, Martha in “Tiefland” as well as Elektra, Salome and Octavian. Her Kundry was as famous as her Carmen and her interpretation of Dalila was as gripping as the one of Nedda.

Even though her vocal resources were not superior to the high standards of her colleagues Sanden held a very special position among the dramatic sopranos of her time. Her portrayals were emotionally gripping and true-to-life and almost bursted with erotic intensity. In a way she can be considered the more lyric counterpart of Barbara Kemp, whose voice, of course, was the much more powerful of the two, but where elegant appearance and bewitching charme were required Sanden surpassed her by far. After the end of World War I her repertory successfully concentrated on “contemporary” works of the Italian “veristi” and Richard Strauss. In 1920 she sang Nedda to Carl Günther´s Canio in one of the first performances after the War at the Zoppot Festival. After a period of twelve years she left the Leipzig Opera House and was heard exclusively in guest performances until 1923. 1923/24 she sang at the Große Volksoper Berlin and was a member of the Munich State Opera from 1924 on. She ended her stage career in 1930 and moved to Berlin where she devoted herself to teaching. In the course of her career Aline Sanden was heard at most of the World´s leading opera stages and led what was then considered a busy and unsettled artistic life between London, Paris, Brussels, Vienna, New York, Chicago or San Francisco. Her private life was simularely eventful. She was married three times: her first husband was the writer Otto Wilhelm Lange, later she was married to the baritone from Bayreuth, Walter Soomer, and since 1927 to the composer Charles Flick-Steger. Aline Sanden died on May 8th 1955 at the age of 79 in Berlin.