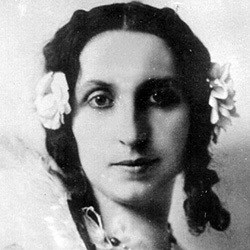 Amelita Galli-Curci is evidence that it is possible to be a self taught singer and ascend to the very height of the profession, as she was at one time hailed as the world’s greatest coloratura soprano. She was born in Milan in 1882 and at the age of 23 was fortunate to perform for Pietro Mascagni who told her: “You have a unique timbre, and this is a rare gift. I would recognize your voice twenty years from now anywhere, and this is something others would give anything to possess.” Astonishingly, Galli-Curci was self taught, by reading the books of Manuel Garcia and practicing piano exercises with her voice rather than keyboard. She later claimed to have mastered coloratura by imitating the calls and dynamics of nightingale birds.

A fascinating character by any definition, her voice was light and exciting, gentle and charming. As with many voices of this type, it was much more suited to recordings than when in large theaters where her lack of vocal size made it difficult to garner the full beauty of the instrument. Nonetheless, her voice was ravishing in tone and stupendously agile and pure, with the ability to float angelic waves of high harmonics over the listener. We sample here her Gilda from Verdi’s Rigoletto, recorded in 1923.