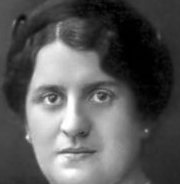 Else Gentner-Fischer was born on September 5th 1883 in Frankfurt am Main where she also began and finished her vocal studies. At the local Opera House she made her operatic debut in 1905 and in the same year married the tenor, Karl Gentner (1876-1922) who, like herself, had a contract with Frankfurt`s Opera House.

It was in her hometown that the artist spent almost her entire career starting out with smaller roles but she soon emerged as one of Germany`s most significant dramatic sopranos. In 1923/24 the soprano toured North America with the German Opera Company and created the part of Myrtocle in the first American performance of d`Albert`s “Die toten Augen” in New York in 1924. Her debut at the Teatro Colón in Buenos Aires took place in 1926 as Isolde in “Tristan” and she also interpreted Brünnhilde in the “Ring”-cycle. The singer was a regular guest at Berlin`s State Opera, at the Teatro Liceo in Barcelona and the Teatro Real in Madrid.

In 1934 the ensemble of Frankfurt`s Opera gave a guest performance in the Netherlands where she sang a highly acclaimed Marschallin in “Der Rosenkavalier”. Gentner-Fischer made her final stage appearance in 1935 as Isolde in Frankfurt.

The soprano`s second husband was the Jewish baritone, Benno Ziegler, who had to emigrate to England in 1939. Under these circumstances Else Gentner-Fischer now definitively had to give up her career and from then on lived secludedly in Upper Bavaria where she died on April 26th 1943.