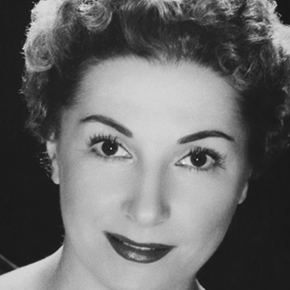 On April 17th 1914 Janine Micheau was born in Toulouse. At the local conservatory she began her vocal studies and later attended the Conservatoire National Paris. As Cherubino in “Le nozze di Figaro” Micheau made her debut in 1933 at the Opéra Comique and enjoyed great success at both the Opéra Comique and the Grand Opéra. On the occasion of a guest performance of the Opéra Comique at the Maggio Musicale Fiorentino in 1937 she performed one of her most acclaimed interpretations, Debussy`s Mélisande. The soprano`s debut at London`s Covent Garden Opera as Micaela took place in the same year and the South American stages of Buenos Aires (Teatro Colón) and Rio de Janeiro first heard her two years later, in 1939.

Micheau created the roles of Creuse in “Medée” (1938) and the part of Manuela in “Bolivar” (May 12th 1950) both operas by Darius Milhaud and both at the Opéra Comique. She also enjoyed a successful career on concert stage where she repeatedly performed Milhaud`s works, some of them were world premieres of songs which he had composed especially for her voice. 1941 was the year of another world premiere at the Opéra Comique: Caroline in “Comme ils s`aiment” by André Lavagne. At the Chicago Opera House in 1946 she was very well received as Violetta and, again, as Micaela and in 1948 the soprano sang at Milan`s “Scala” in the first Italian performance of Ravel`s “L`Enfant et les sortilèges”. In 1952 Micheau returned to the Opéra for performances of Rameau`s “Les Indes galantes” and as Pamina in “Die Zauberflöte” and was invited to the Festival at Aix-en-Provence for Gluck`s “Orpheus” in 1955 and Rameau`s “Platée” in 1956. In the years from 1938 to 1957 Micheau was heard at the San Francisco Opera House and sang in Belgium, Italy and the Netherlands and undertook a very successful tour through South-America.

Micheau gave her official farewell performance in 1960 at the Opéra Comique but came back for one performance as Pamina at the Opera House of Rouen. Later, she was deeply involved in teaching singing at the Conservatoire National de Paris and at Salzburg`s Mozarteum.