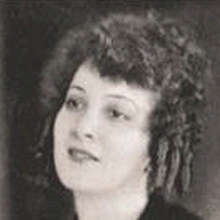 Lotte Schöne was born on December 15th 1891 in Vienna where, at the age of 14, she began to study singing with Johannes Ress and later continued her vocal studies with Luise Ress and Maria Brossement. She made her stage debut in 1912 at the Vienna Volksoper as bridesmaid in “Der Freischütz” and in 1917 was offered a contract by Vienna`s Court Opera, later called State Opera, where the singer enjoyed great popularity until 1926 when Schöne was invited by Bruno Walter to perform at the Städtische Oper, Berlin. Her repertory in Vienna mainly consisted of roles from the soubrette repertoire whereas in Berlin she was cast as Mimi, Pamina, Melisande, Liù and Butterfly. Lotte Schöne was London`s first Liù and became France`s favourite personification of Melisande.

Due to her Jewish origins the soprano had to leave Germany in 1933 and subsequently was engaged at the Opéra Comique in Paris. She also appeared at the Grand Opéra and undertook concert tours in France, Belgium, the Netherlands and Switzerland. When France was occupied by the German troups in 1940 Schöne had to take refuge in a small village in the French alps where she kept hiding during the following years. In 1945 the singer resumed her career but from that point on almost exclusively appeared in concerts. Schöne performed one last time at the Städtische Oper, Berlin in 1948 before she definitively retired in 1953. Lotte Schöne settled as a singing pedagogue in Paris where she died on December 22nd 1977.