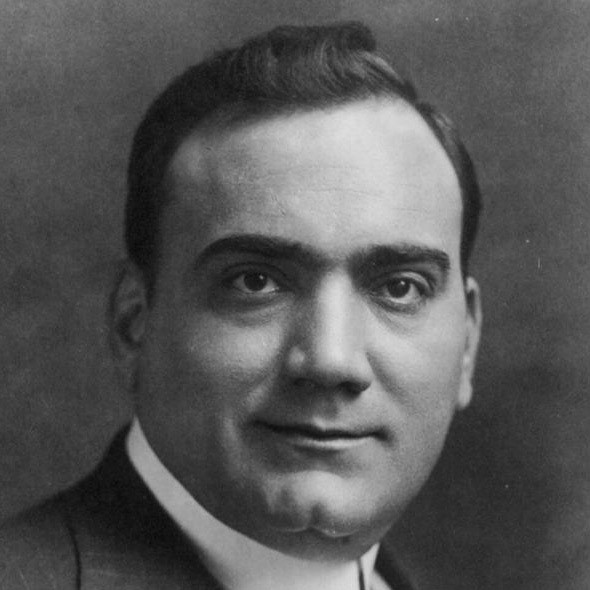 Born on February 25th 1873, in Napoli, Italy, Enrico Caruso grew up in poor and destitute circumstances. He was probably the third of seven children to an alcoholic father, and Caruso received little or no education. His musical training was made up of choir rehearsals in church until his voice broke, whereupon he made his living as a hired serenade singer.

His operatic debut took place on 15 March 1895 in a Neapolitan back street theater, but it was sufficient to launch the young “Enrico” on the south Italian circuit. His coup came when auditioning for Puccini himself the summer of 1897 for a performance of La Bohème in Livorno; a baffled Puccini uttered the celebrated line “Who sent you to me? God himself?”

Great fame followed with Fedora in Milano, and Caruso was signed for a lucrative recording contract with the Gramophone and Typewriter Company in 1902 for ten arias at £10 per take. In May the same year he debuted at the Covent Garden in Rigoletto, and his Met debut came in November 1903. He sang with the company the next 18 seasons, appearing on 607 occasions in 37 different operas. “His name was to become synonymous with greatness, a household word, and his movements were followed fastidiously by public and media alike” [Roland Vernon].

At the height of his career he fell ill with bronchial pneumonia which later developed into chronic pleurisy. After several misfortunate attempts of surgery, he died in his native Napoli on August 2nd 1921, 48 years of age.