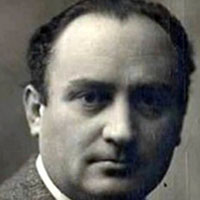 Merli studied in Milan and in 1914 he was awarded second prize in a competition for young singers (the winner was Beniamino Gigli).  The same year he started his professional career and in 1916 he made his first appearance at La Scala Milan, which was to remain his operatic ‘home.’  This was at a time when the tenor competition included Gigli, Martinelli, Lauri-Volpi, Pertile, Schipa etc., in Italy alone.  Merli none the less enjoyed quite a splendid career which took him throughout Europe, and the USA but essentially, he was the La Scala tenor.  After retiring from the stage in the 1950’s, he taught in Milan.