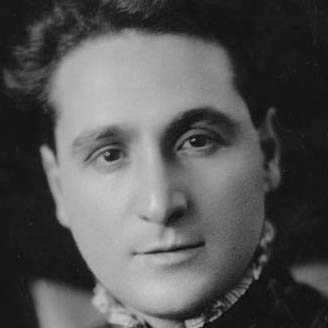 Which tenor had the career of Lauri-Volpi? Not many. Despite his fairly late debut at the age of 27, the Italian tenor enjoyed one of history’s longest careers, making his last opera performance at the age of 67 and astonished the world of opera by releasing a recital disc in his 81st year, having survived three generations of singers. His splendid vocal technique allowed him to excel in lyrical as well as dramatic tenor roles. He was a living legend already in his prime years and when he died at the age of 86, he left a legacy of one of the most outstanding tenor careers this century.

Giacomo Volpi (Lauri was a later addition to distinguish him from two other tenors of the same name) was born on December 11th 1892 in the little Italian village of Lanuvio to the south east of Roma. Orphaned at the age of 11, he was sent to the seminary of Albano for secondary education and

continued with law studies at the University “La Sapienza” of Roma. After graduation, he won second place at a singing competition and began vocal studies at the Academia di Santa Cecilia in Roma under the tutorship of the legendary baritone Antonio Cotogni, then 83 years of age, reputed as one of the finest vocal teachers in Italy. Their relationship and Lauri-Volpi’s studies were cut short by the onset of the First World War, and when Lauri-Volpi returned, a captain with a distinguished fighting record behind him, Cotogni had died. He fell out with Cotogni’s successor, Enrico Rosati, and eventually left the Academy. He was given the opportunity by another Cotogni’s pupil, the celebrated baritone Ezio Basiola, to make his debut in Viterbo nearby Roma on 2nd September 1919, at the age of 27, as Arturo in Bellini’s I Puritani. He appeared under the name of Giacomo Rubini, assuming the name of the prime tenor exponent of bel canto in the 19th century and Bellini’s personal favorite, Giovanni Battista Rubini. The success was immediate and only four months later, on 3 January 1920, he appeared at the Costanzi of Roma as Des Grieux in Puccini’s Manon Lescaut, alongside Ezio Pinza and Rosina Storchio, now under his own name. News of this talented new tenor spread quickly and within short he was in demand at all the major theaters worldwide. From the Costanzi he went to Rio, Buenos Aires, Trieste, Genova and Milano (Teatro dal Verme) during 1920; the following year he passed through Bologna, Madrid, Barcelona and Monte Carlo. He appeared at La Scala in 1922 as the duke in Verdi’s Rigoletto, then at the Met in 1923; London and Covent Garden followed in 1925 where he performed in Andrea Chenier (and did only further one season with the house, in 1936, appearing as Radames, the Duke and Cavaradossi). He also appeared in Paris that year.

Lauri-Volpi managed to make a name for himself in New York and enjoyed immense popularity and status as the Met’s prime tenor during the 20’s, appearing in some 232 performances in a total of 26 operas. This included the American premiere of Turandot in 1926 with Maria Jeritza as the princess and the first Metropolitan Luisa Miller in 1929 with Rosa Ponselle as Luisa.

He stayed with the Met until 1933. In his last two operatic seasons, when the Met fell under hard times, and contrary to other rival tenors, he accepted contractual salary cuts proposed by Gatti-Casazza, the then General Manager of the Met. His motives were allegedly to pay homage to Gatti-Casazza, whose authority had disciplined and gathered, in America, celebrated singers from many nations. He then returned to Italy, as did Gigli.

The fascist uprise in Italy prevented him from leaving the country and Mussolini regarded him highly both as a singer and writer. However, high exponents of the fascist regime as well as the media considered Lauri-Volpi to be an enemy and extraneous to their propaganda, partly why he sought “exile” in Spain. Lauri-Volpi had planned to return to the Met for the 1940-41 season, but the onset of World War II changed his plans. Mussolini made him a full colonel in the Italian Army and he often served singing at patriotic and military functions.

After the war, Volpi kept touring a large part of Europe incessantly, always returning to Burjasot in Spain, his second home away from home, with his beloved Spanish wife and voice mentor, the soprano Maria Ros. His international reputation was not damaged due to his alleged fascist sympathies, and his reputation for having been the favourite tenor of Mussolini son, Bruno, did not prevent him from appearing in allied countries: England (1946/54), France (1947/49/52), Belgium (1947/48/49), Portugal (1946), Denmark (1947), Sweden (1947) and Holland (1954). In post-war years, his presence yet again was becoming highly acclaimed but his voice had deteriorated slightly. Still, he received considerable popular acclaim well into the 50’s. He performed in public until 1959, when he sang as Manrico (Il Trovatore) in Rome. It has become common to divide Lauri-Volpi’s career into three stages; an early bel canto period coinciding with his first five to ten active years with an emphasis on the melodic line and phrasing with superb legato and a well integrated top register. A second period was slightly emerging by the end of the 30’s where he developed his inherent spinto qualities, and appeared in more vocally demanding roles, adding more drama and weight to his singing. He eventually also became known for abusing his voice, with exuberant, open high notes and singing with much pathos in taxing repertory (he became a widely acclaimed Otello [Verdi] and Arnoldo of Guglielmo Tell [Rossini], after having performed at La Scala in 1929 in the centenary production of the latter). When he thus reappeared on the international scene in the late 40’s, considered the third stage of his career, he had changed vocally with notable less beauty and a much less integrated voice. He had maintained his brilliant and thrilling top notes, but had also begun to employ them in a heavily driven, detached manner, having wiped out his early and youthful bel canto standards. Nevertheless, his singing was still spectacular and he became the epitome of longevity. At the age of 81 he surprised the operatic world by releasing a recital recording of operatic arias.

Lauri-Volpi had also become the epitome of a divo with his many outbursts of latin temperament and self-indulgent appraisal of his own instrument throughout his career. His hot temper caused many a disagreement with both envious fellow soloists, opera directors and conductors, especially Toscanini (yet he chose Lauri-Volpi at the expense of Pertile to tour Berlin in 1929), as well as stage personnel and orchestra members. He was very proud of his voice, “la voce solitaria” as he coined it, and alas, very outspoken, and this alienated him many people. He was at the same time a highly cultured man, unusal for a tenor, and particularly respected for his many insightful comments on music and vocal training, many of which he published, counting Cristalli viventi (Roma, 1948), Voci parallele (Milano, 1955), and Misteri della voce umana (Milano, 1957).

Even though at an old age, Lauri-Volpi enjoyed stunningly good health, more the reason why his death on March 17 1979 came somewhat unexpected. He died in Burjasot near Valencia, at the age of 86.