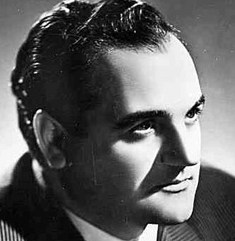 A tenor gifted with a beautiful voice and a bright natural talent, he studied in Milan under Emilio Ghiradini.  He made his debut in 1947 in Palermo singing the short role of Ismaele inNabucco.  He was particularly successful as Riccardo in Ballo in Maschera which became one of his most famous roles.  As well as singing throught Italy and Europe, including London,he also visited Mexico and Buenos Aires and other South American venues.  He sang at the NY Met in 1957 and his career ended in Piacenza in 1969 after an unexpected and quick vocal decline.  He was a true Italian tenor, guided more by a natural instinct than by study and meditation, easy going by nature, but with vocal limitation.