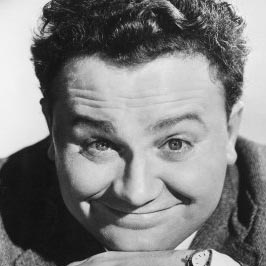 Music played a big part in Harry Secombe’s life, from his childhood in Swansea when he was a choirboy at St Stephen’s, Danygraig, although he never had a singing lesson until 1952. He got his first break during the war, taking part in many concert parties and revues. His success led him to decide to follow a career in showbiz, and in the five years following his demobilization in 1946 he did a lot of variety work. This included appearances on the very popular BBC Wales radio show “Welsh Rarebit”.

Singing became secondary for the next few years, with the runaway success of The Goon Show from 1951, and it was only after its demise in 1960 that Harry Secombe really exercised his vocal talents again.

His love of music and deeply-held religious beliefs came together with the Sunday evening shows “Highway” and then “Songs Of Praise” in the 1980s and 1990s, when he both performed hymns and presented. He was made a CBE in 1963 and knighted in 1981, for his charity work and services to entertainment.

Always self-deprecating about his voice, Harry Secombe maintained that he had a “veranda” rather than a “drawing room” voice, liable to break chandeliers if used indoors. He sang a duet from La Bohème with Sir Geraint Evans at a party in Glyndebourne in 1959, and amazed performers and opera-goers with the quality of his singing, a pulpy mid register, arched lyricism and facility in the upper register.