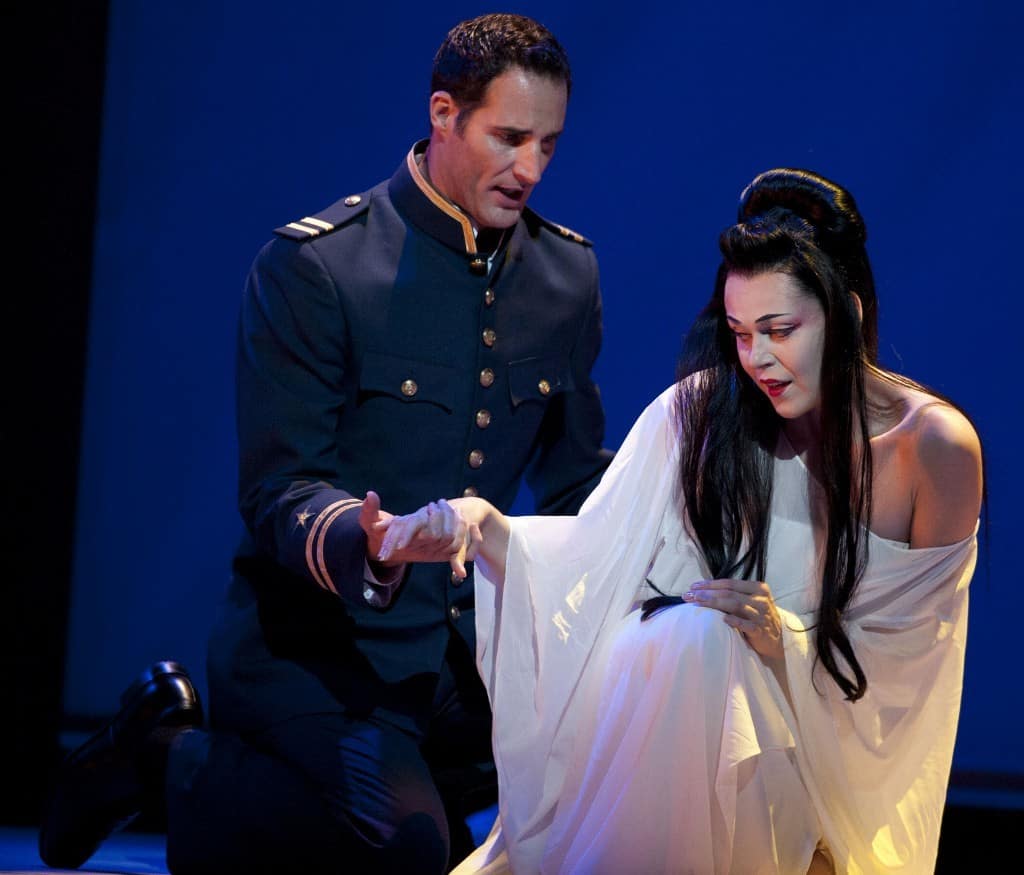 It’s nearly Valentine’s Day! That means it’s time to either drown in romance, or make fun of it. Opera offers plenty of opportunities for both. Just be careful not to pattern your relationships after opera characters’. The lovers in (tragic) opera often end up dead. And while they’re alive, they tend to be jealous, abusive, and sometimes even murderous. Here are some of opera’s least healthy relationships. (There are too many to cover them all—feel free to comment with your favorites, too.)

Butterfly and Pinkerton (Puccini’s Madama Butterfly)
There is so much wrong here, I don’t even know where to start. Child bride? Check. Exoticizing Japanese women? Check. The woman giving up everything for the man? Check. Abandonment and subsequent bigamy, leading to despair and suicide? Check.

Amelia and Renato/Anckarström (Verdi’s Un ballo in maschera)
When Renato (or Anckarström, depending on the version of the opera) discovers that the veiled woman he is escorting home from a meeting with the King is his own wife, he flies into a jealous rage. He immediately threatens to kill her, ignoring her insistence on her innocence. He also joins a plot to assassinate the King. Death and regret follow.

Fiordiligi and Guglielmo and Dorrabella and Ferrando (Mozart’s Così fan tutte)
If your boyfriends are jerks enough to fake a tragic parting and come back in disguises to test your fidelity, you owe them nothing. Especially if they use unfair tactics like suicide attempts to manipulate you into cheating on them. The correct approach when all is revealed is to be really, really angry with them, not to remorsefully say that you deserve to die.

Sesto and Vitellia (Mozart’s La clemenza di Tito)
Sesto is desperately in love with Vitellia. She’s more interested in political power than romance. Sesto suspects this, and she mocks his suspicions, singing that those who expect betrayal deserve to be betrayed. When the emperor Tito doesn’t choose Vitellia as his empress, she takes advantage of Sesto’s blind devotion to make him kill Tito. While she eventually sees the error of her ways, Sesto’s weak will and Vitellia’s manipulative abilities ensure their relationship will never be a happy one.

Rusalka and the Prince (Dvořák’s Rusalka)
Not recommended: giving up an essential part of yourself (like your voice) to pursue a hot guy. Also not recommended: having your eternal salvation or damnation depend on the success of your relationship.

Jenůfa and Števa and Jenůfa and Laca (Janáček’s Jenůfa)
Jenůfa gets two duds here. Her first boyfriend is the shallow, alcoholic Števa, who only likes her because she’s the prettiest girl in town. When Laca slashes Jenůfa’s face, Števa deserts her, even though she’s pregnant with his child. Jenůfa ends up with Laca—yes, the same Laca who took a knife to her cheek. He becomes devoted and dependable, and the opera’s ending is touchingly redemptive. But he still didn’t deserve a second chance. He permanently disfigured her. With a knife. Why did she even talk to him again?

Carmen and Don José (Bizet’s Carmen)
Stabbing your ex is not an appropriate reaction to a break-up. Enough said.